The solar cycle was discovered in 1843 by Samuel Heinrich Schwabe, who after 17 years of observations noticed a periodic variation in the average number of sunspots.  Rudolf Wolf compiled and studied these and other observations, reconstructing the cycle back to 1745, eventually pushing these reconstructions to the earliest observations of sunspots by Galileo and contemporaries in the early seventeenth century.

The period between 1645 and 1715, a time of few sunspots,  is known as the Maunder minimum, after Edward Walter Maunder, who extensively researched this peculiar event, first noted by Gustav Spörer.

In the second half of the nineteenth century Richard Carrington and Spörer independently noted the phenomena of sunspots appearing at different latitudes at different parts of the cycle.

The cycle’s physical basis was elucidated by George Ellery Hale and collaborators, who in 1908 showed that sunspots were strongly magnetized (the first detection of magnetic fields beyond the Earth). In 1919 they showed that the magnetic polarity of sunspot pairs:

Hale’s observations revealed that the complete magnetic cycle spans two solar cycles, or 22 years, before returning to its original state. However, because nearly all manifestations are insensitive to polarity, the “11-year solar cycle” remains the focus of research. Furthermore, the two halves of the 22-year cycle are typically not identical; the 11-year cycles usually alternate between higher and lower sums of Wolf’s sunspot numbers (the Gnevyshev-Ohl rule).

In 1961 the father-and-son team of Harold and Horace Babcock established that the solar cycle is a spatiotemporal magnetic process unfolding over the Sun as a whole. They observed that the solar surface is magnetized outside of sunspots, that this (weaker) magnetic field is to first order a dipole, and that this dipole undergoes polarity reversals with the same period as the sunspot cycle. Horace’s Babcock Model described the Sun’s oscillatory magnetic field as having a quasi-steady periodicity of 22 years. It covered the oscillatory exchange of energy between toroidal and poloidal solar magnetic field ingredients. 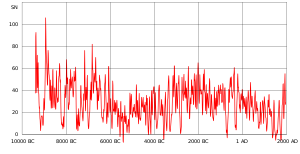 Sunspot numbers over the past 11,400 years have been reconstructed using Carbon-14-based dendroclimatology. The level of solar activity beginning in the 1940s is exceptional – the last period of similar magnitude occurred around 9,000 years ago (during the warm Boreal period).  The Sun was at a similarly high level of magnetic activity for only ~10% of the past 11,400 years. Almost all earlier high-activity periods were shorter than the present episode. Fossil records suggest that the Solar cycle has been stable for at least the last 700 million years. For example, the cycle length during the Early Permian is estimated to be 10.62 years and similarly in the Neoproterozoic.

Until 2009 it was thought that 28 cycles had spanned the 309 years between 1699 and 2008, giving an average length of 11.04 years, but research then showed that the longest of these (1784–1799) seems actually to have been two cycles, so that the average length is only around 10.7 years. Since observations began cycles as short as 9 years and as long as 14 years have been observed, and in the double cycle of 1784–1799 one of the two component cycles had to be less than 8 years in length. Significant amplitude variations also occur.