The Medieval Warm Period (MWP) also known as the Medieval Climate Optimum, or Medieval Climatic Anomaly was a time of warm climate in the North Atlantic region that may have been related to other warming events in other regions during that time, including China and other areas, lasting from c. 950 to c. 1250. Other regions were colder, such as the tropical Pacific. Averaged global mean temperatures have been calculated to be similar to early-mid 20th century warming. Possible causes of the Medieval Warm Period include increased solar activity, decreased volcanic activity, and changes to ocean circulation.

The period was followed by a cooler period in the North Atlantic and elsewhere termed the Little Ice Age. Some refer to the event as the Medieval Climatic Anomaly as this term emphasizes that climatic effects other than temperature were important.

It is thought that between c. 950 and c. 1100 was the Northern Hemisphere’s warmest period since the Roman Warm Period. It was only in the 20th and 21st centuries that the Northern Hemisphere experienced warmer temperatures. Climate proxy records show peak warmth occurred at different times for different regions, indicating that the Medieval Warm Period was not a globally uniform event.

The Medieval Warm Period (MWP) is generally thought to have occurred from c. 950–c. 1250, during the European Middle Ages.  In 1965 Hubert Lamb, one of the first paleoclimatologists, published research based on data from botany, historical document research and meteorology, combined with records indicating prevailing temperature and rainfall in England around c. 1200 and around c. 1600. He proposed, “Evidence has been accumulating in many fields of investigation pointing to a notably warm climate in many parts of the world, that lasted a few centuries around c. 1000–c. 1200 AD, and was followed by a decline of temperature levels till between c. 1500 and c. 1700 the coldest phase since the last ice age occurred.”

The warm period became known as the Medieval Warm Period, and the cold period was called the Little Ice Age (LIA). However, that view was questioned by other researchers; the IPCC First Assessment Report of 1990 discussed the “Medieval Warm Period around 1000 AD (which may not have been global) and the Little Ice Age which ended only in the middle to late nineteenth century.” The IPCC Third Assessment Report from 2001 then summarized research: “evidence does not support globally synchronous periods of anomalous cold or warmth over this time frame, and the conventional terms of ‘Little Ice Age’ and ‘Medieval Warm Period’ appear to have limited utility in describing trends in hemispheric or global mean temperature changes in past centuries.” Global temperature records taken from ice cores, tree rings, and lake deposits, have shown that the Earth may have been slightly cooler globally (by 0.03 °C) than in the early and mid-20th century.

Palaeoclimatologists developing region-specific climate reconstructions of past centuries conventionally label their coldest interval as “LIA” and their warmest interval as the “MWP.

Others follow the convention, and when a significant climate event is found in the “LIA” or “MWP” time frames, they associate their events to the period. Some “MWP” events are thus wet events or cold events rather than strictly warm events, particularly in central Antarctica, where climate patterns opposite to the North Atlantic area have been noticed.

Evidence exists across the world, often very sparsely, for changes in climatic conditions over time. Some of the “warm period” events documented below are actually “dry periods” or “wet periods.

A 2009 study by Michael E. Mann et al., examining spatial patterns of surface temperatures shown in multi-proxy reconstructions finds that the Medieval Warm Period, shows “warmth that matches or exceeds that of the past decade in some regions, but which falls well below recent levels globally.” Their reconstruction of the pattern is characterised by warmth over large part of North Atlantic, Southern Greenland, the Eurasian Arctic, and parts of North America which appears to substantially exceed that of the late 20th century (1961–1990) baseline and is comparable or exceeds that of the past decade or two in some regions. Certain regions, such as central Eurasia, northwestern North America, and (with less confidence) parts of the South Atlantic, exhibit anomalous coolness.

Further analysis of the bulk compilation of all paleoclimatology studies that were done in various areas around the globe appear to indicate a global trend of warming, particularly in the northern and southern peaks but less towards the equator. More recently, a study by the Pages-2k consortium suggests the warming was not globally synchronous: “Our regional temperature reconstructions also show little evidence for globally synchronized multi-decadal shifts that would mark well-defined worldwide MWP and LIA intervals. Instead, the specific timing of peak warm and cold intervals varies regionally, with multi-decadal variability resulting in regionally specific temperature departures from an underlying global cooling trend.” 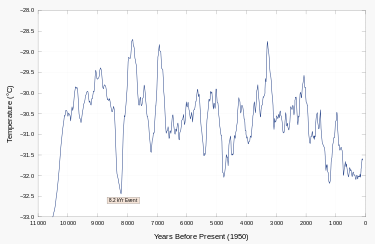 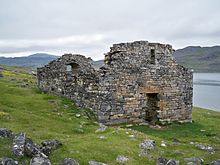 The last written records of the Norse Greenlanders are from an Icelandic marriage in 1408 but recorded later in Iceland, at Hvalsey Church, now the best-preserved of the Norse ruins.

Using sediment samples from Puerto Rico, the Gulf Coast, and the Atlantic Coast from Florida to New England, Mann et al. (2009) found consistent evidence of a peak in North Atlantic tropical cyclone activity during the Medieval Warm Period that was followed by a subsequent lull in activity.

By retrieval and isotope analysis of marine cores and from an examination of mollusk growth patterns from Iceland, Patterson et al was able to reconstruct a mollusk growth record at a decadal resolution from the Roman Warm Period to the Medieval Warm Period and the Little Ice Age. 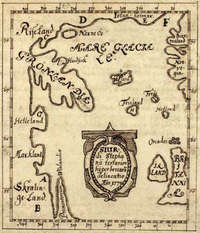 1690 copy of the 1570 Skálholt map, based on documentary information about earlier Norse sites in America.

The 2009 Mann et al. study found warmth exceeding 1961–1990 levels in Southern Greenland and parts of North America during the Medieval Climate Anomaly (defined in the study from 950 to 1250) with warmth in some regions exceeding temperatures of the 1990–2010 period. Much of the Northern Hemisphere showed significant cooling during the Little Ice Age (defined in the study from 1400 to 1700), but Labrador and isolated parts of the United States appeared to be approximately as warm as during the 1961–1990 period.

Norse colonization of the Americas has been associated with warmer periods. The common theory is that Norsemen took advantage of ice-free seas to colonize areas in Greenland and other outlying lands of the far north. However a study from Columbia University suggests that Greenland was not colonized in warmer weather, but in fact the warming effect was very short term. c. 1000AD, the climate was sufficiently warm for the Vikings to journey to Newfoundland and establish a short-lived outpost there.

From around 985, Vikings founded the Eastern Settlement and Western Settlement, both near the southern tip of Greenland. In the colony’s early stages, they kept cattle, sheep, and goats, with around a quarter of their diet from seafood. After the climate became colder and stormier around 1250, their diet steadily shifted towards ocean sources; by around 1300, sealhunting provided over three-quarters of their food.

By 1350, there was reduced demand for their exports, and trade with Europe fell away. The last document from the settlements dates from 1412, and over the following decades, the remaining Europeans left in what seems to have been a gradual withdrawal, caused mainly by economic factors such as increased availability of farms in Scandinavian countries. 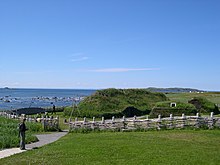 L’Anse aux Meadows, Newfoundland, today, with a reconstruction of a Viking settlement.

In Chesapeake Bay (now Maryland and Virginia in the United States), researchers found large temperature excursions (changes from the mean temperature of that time) during the Medieval Warm Period (about 950–1250) and the Little Ice Age (about 1400–1700, with cold periods persisting into the early 20th century), possibly related to changes in the strength of North Atlantic thermohaline circulation. Sediments in Piermont Marsh of the lower Hudson Valley show a dry Medieval Warm period from 800 to 1300.

Prolonged droughts affected many parts of the western United States and especially eastern California and the west of the Great Basin. Alaska experienced three-time intervals of comparable warmth: 1–300, 850–1200, and post-1800. Knowledge of the North American Medieval Warm Period has been useful in dating occupancy periods of certain Native American habitation sites, especially in arid parts of the western United States. Review of more recent archaeological research shows that as the search for signs of unusual cultural changes has broadened, some of the early patterns (for example, violence and health problems) having been found to be more complicated and regionally varied than it had been previously thought. Others, like settlement disruption, deterioration of long-distance trade, and population movements, have been further corroborated.

The climate in equatorial eastern Africa has alternated, being between drier than today and relatively wet. The drier climate took place during the Medieval Warm Period (1000–1270).

Corals in the tropical Pacific Ocean suggest that relatively cool, dry conditions may have persisted early in the millennium, consistent with a La Niña-like configuration of the El Niño-Southern Oscillation patterns.

The Medieval Warm Period has been noted in Chile in a 1500-year lake bed sediment core as well as in the Eastern Cordillera of Ecuador.

A reconstruction based on ice cores found the Medieval Warm Period could be distinguished in tropical South America from about 1050 to 1300 that was followed, in the 15th century, by the Little Ice Age. Peak temperatures did not rise as high as those from the late 20th century, which were unprecedented in the area during the study period of 1600 years.

Adhikari and Kumon (2001), investigating sediments in Lake Nakatsuna in central Japan, found a warm period from 900 to 1200 that corresponded to the Medieval Warm Period and three cool phases, two of which could be related to the Little Ice Age. Another research in northeastern Japan shows that there is one warm and humid interval, from 750 to 1200, and two cold and dry intervals, from 1 to 750 and from 1200 to now.  Ge et al. studied temperatures in China during the past 2000 years and found high uncertainty prior to the 16th century but good consistency over the last 500 years highlighted by the two cold periods, the 1620s–1710s and 1800s–1860s, and the warming during the 20th century. They also found that the warming during the 10–14th centuries in some regions might be comparable in magnitude to the warming of the last few decades of the 20th century, which was unprecedented within the past 500 years.

There is an extreme scarcity of data from Australia for both the periods of the Medieval Warm Period and the Little Ice Age. However, evidence from wave-built shingle terraces for a permanently-full Lake Eyre during the 9th and 10th centuries is consistent with a La Niña-like configuration, but the data is insufficient to show how lake levels varied from year to year or what climatic conditions elsewhere in Australia were like.

A 1979 study from the University of Waikato found,”Temperatures derived from an 18O/16O profile through a stalagmite found in a New Zealand cave (40.67°S, 172.43°E) suggested the Medieval Warm Period to have occurred between AD c. 1050 and c. 1400 and to have been 0.75 °C warmer than the Current Warm Period.” More evidence in New Zealand is from an 1100-year tree-ring record.